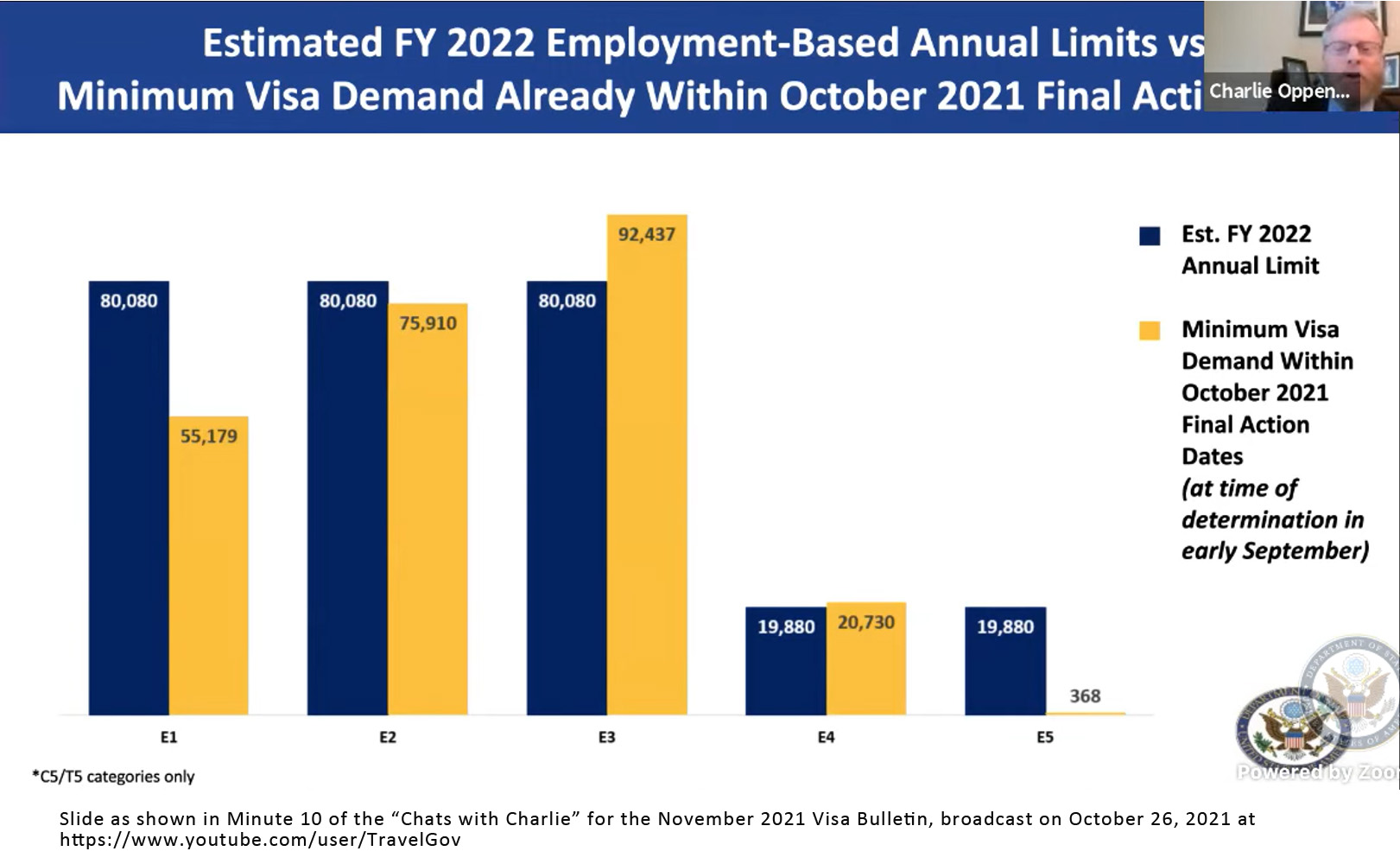 Today’s “Chat with Charlie” on the November 2021 Visa Bulletin included a slide with another reminder of the cost of delay in regional center program authorization.

As the chart shows, the E5 (EB-5) category has a record 19,880 visas available this year (even higher than the 18,602 previously anticipated), and so far only about 368 applicants eligible to claim them. Those 368 applicants represent the inventory of direct EB-5 (C5 and T5) applicants at the visa stage as of September 2021, except for China-born applicants with priority dates more recent than November 22, 2015 (the China final action date in the October 2021 visa bulletin).

So close to visa relief, yet so far! FY2022 offers massive extra supply (thanks to roll-over from unused family-based numbers last year) but we’re held back from using it.

Hypothetically, if the regional center program had stayed authorized and USCIS and DOS worked efficiently enough to issue the almost 20,000 EB-5 visas available, then the EB-5 backlog at the visa stage could have been reduced by about 40% this year alone. (As of November 2020, DOS reported 50,936 total EB-5 applicants registered at the National Visa Center.)

The story is particularly sad for applicants from China, who could have theoretically gotten up to 15,000 leftover EB-5 visas this year (about 20,000 quota total minus about 5,000 visas required to satisfy rest-of-world demand at the National Visa Center). The loss is only theoretical (the backlogged Guangzhou consulate probably lacks capacity to schedule that many EB-5 interviews in a year even without the regional center issue), but still painful.

What needs to happen to minimize EB-5 visa loss this year?

One. The industry needs to make all possible concessions to get the regional center program reauthorized as soon as possible, so that RC visas can be issued again as soon as possible. Assuming that getting attached to the FY2022 Appropriations requires agreeing to reforms and conditions demanded by Senate Appropriations Committee Chair Leahy, then please agree. Regional center applicants represent over 90% of the EB-5 backlog, and lack legal basis to get visas until the law changes to provide reauthorization and/or grandfathering. Negotiators will not be thanked if they hold out too hard for the “bird in the bush” of visa relief in legislation, at a cost of losing the “bird in the hand” of tens of thousands of EB-5 visas available in 2021 and 2022 on a “use it or lose it” basis.

Two. USCIS needs to speed up processing of direct EB-5 I-526, so that at least direct EB-5 applicants can maximize visa use this year. DOS reports only 368 eligible direct EB-5 applicants at the visa stage as of September 2021. Meanwhile, there are probably at least 1,000 direct EB-5 investors with I-526 pending at USCIS (considering the total pending inventory of about 13,000). At previous productivity levels, USCIS could have already finished adjudicating 1,000 direct I-526 and sent them off with their families to the visa stage since June 30, thus adding another 3,000 or so applicants eligible for direct EB-5 visas. Instead, here’s what’s happened with I-526 adjudications since June 30, 2021 according to my leaker friend: July, 45 I-526 approved; August, 15 I-526 approved; September, 15 I-526 approved; October to date, 7 I-526 approved. This inexcusably low productivity needs urgent management intervention.

Three. The small number of EB-5 applicants eligible for visas in FY2022 could also increase if Department of State decided to move China Visa Bulletin dates just for direct EB-5. If DOS made China direct EB-5 (C5 and T5) “current” in the Visa Bulletin, that would make around 4,000 more Chinese direct EB-5 applicants eligible for visas even while the RC program is lapsed. That could effectively lower EB-5 visas loss in FY2022 by about 4,000 visas. In previous visa bulletin chats, however, Charles Oppenheim gave no indication that he would consider such a move. There’s a strong principle to keep the visa queue in order and avoid date progression that has to be corrected later with date retrogression. Moving China visa bulletin dates just for direct EB-5 would implicitly give up on regional center authorization happening any time soon, and displace regional center applicants from China. I guess DOS would not be eager to make that call. This puts us back to option one: do whatever it takes to get the regional center program reauthorized as soon as possible.

As a side note, see minute 36 of the Chat with Charlie linked above for a brief comment in response to my question about why, despite “current” Chart B for I5 and R5, NVC has been emailing regional center applicants that it “will not act on any new or pending EB-5 visa petitions as described above until further notice. Please do not submit any additional fees or forms to NVC.”)

Finally, warm appreciation due to Charles Oppenheim, Chief of the Immigrant Visa Control Office at Department of State. He is now retiring after 43 years, and I hope the government remembers and learns from his wonderful example. We need more civil servants like Charlie who are true experts plus committed to communication and process improvements. He spent decades doing everything he could as an individual toward the Herculean task of making U.S. immigration as fair, functional, and understandable as possible. Thank you Charlie for your generosity, integrity, and hard work! What will we do without you?