Millionaire US Immigrants | WhatsApp and eBay Founders Koum and Omidyar 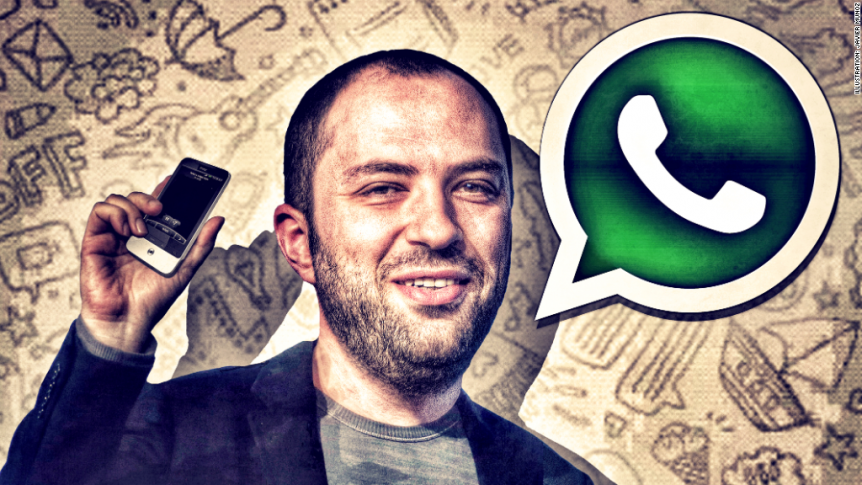 Today we return to our coverage of famous and millionaire US celebrity immigrants.

The theme today is Tech and America: 2 immigrants, 2 visions, and 2 famous companies.

Jan Koum, born in Ukraine and founder of WhatsApp; and Pierre Omidyar, born in France, founder of eBay.

We will discover their origins, their US immigration story, how they created their empire and fame, and how they are active now.

Net Worth: $10.1 billion in July 2021. He is the co-founder and was the CEO of WhatsApp, a mobile messaging application that was acquired by Facebook, Inc. in February 2014 for US 19.3 billion.

Jan Koum is a Ukrainian American billionaire businessman and computer programmer. Co-founder of the world’s most popular texting app. Since 2009 WhatsApp has continued to grow and over the past 10 years, the success of the app has skyrocketed, boasting 1.5 billion active users, 1 million new registrations daily, and 300 million daily users as of 2019. The app is used in 180 countries and is the largest of all messaging networks.

Jan Koum was born February 24, 1976, in Fastiv, near Kyiv in communist Ukraine.

Growing up in the communist regime deeply affected his childhood and helped form his enduring values. He is notoriously pro-privacy, as we will learn later.

Once communism fell in Ukraine, his mother decided to move to the USA to start a new life. Joined by his grandmother, they began anew in California. His mother was diagnosed with terminal cancer; they survived through a variety of low-paying jobs, and government assistance.

Fuelled by a passion for computer programming, Koum enrolled in San Jose State University in 1994, while working as a security tester for Ernst & Young. This is where he met future WhatsApp co-founder Brian Acton.

In 1997, Koum moved on to Yahoo as an infrastructure engineer. Acton joined him there where they worked for 9 years.

Koum and his friend Acton traveled through South America for a year. When he returned, Jan bought an iPhone and began thinking of an app that would be popular. In 2009, he incorporated WhatsApp in California and thus began the rise of the world’s most popular messaging app. Various iterations of the app saw it morph into its present configuration as an SMS / MMS messaging tool.

The app grew rapidly at the beginning as a free app, then slowed as it became a paid service. Over the years, venture capitalists invested in the app. WhatsApp was initially very anti-advertising and pro-privacy.

From April 2013 to February 2014, the business grew by 265 million users, enough to attract the attention of Facebook co-founder Mark Zuckerberg. In mid-February 2021, an offer was made to acquire WhatsApp for 19 billion USD.

The buyout made Koum a billionaire, but this was just the beginning of another chapter involving WhatsApp….

Over the first half of 2016, Koum sold more than $2.4 billion worth of Facebook stock, which was about half of his total holdings.

In April 2018, Koum announced that he was leaving WhatsApp and stepping down from Facebook’s board of directors due to disputes with Facebook. It was originally thought that by leaving he was forfeiting his unvested stock, worth almost $1 billion. However, several months later it was discovered that he was still formally employed by Facebook, earning a reported $450 million in stock from the company through a method called “rest and vest.”

Over the last 5 years, Koum, and specifically co-founder Acton, have been staunchly pro-privacy, as well as anti-advertising, which has put them at odds with Facebook’s policy of selling user data.

Jan’s early years in America were tough as his family entered a new country with nothing more than hope and dreams. In his teenage years, both his father and mother died.

Yet, years of hard work, patience, and dedication landed him the big one- WhatsApp. Koum decided to sign the FB buyout papers in 2016 at the entrance of a government building where he used to collect food stamps, to honor his journey and family sacrifice.

How He Gives Back

Whatsapp was created through the vision of providing an inexpensive way to communicate across the world with friends and family. The company is now worth billions, nonetheless, Koum rejects the entrepreneur label. He believes in technology as a way to make useful tools for humanity.

Jan is active as a philanthropist.

FreeBSD is an open-source UNIX-like computer operating system. Popular derivatives of the FreeBSD codebase include the Darwin operating system, which runs Apple products as well as PlayStation.

French-born with Iranian ancestry, Omidyar came to the United States with his parents when he was just 6. He founded the online auction house eBay in 1995. Omidyar has expanded his portfolio in recent years, investing in media outlets such as The Intercept.

Pierre Omidyar was born in Paris, the son of Iranian parents who had emigrated to France for higher education. His mother Elahe is an academic in linguistics and his father Cyrus is a surgeon and a urologist.

The family moved to Honolulu Hawaii before settling in Maryland, where Pierre finished his high school studies. In what in this period where he found his passion for tech and computer programming.

He then graduated with a degree in computer science at Tufts University before receiving another degree at Berkeley University.

Early in his career, he worked for both Apple and Microsoft. He gained experience, wealth, and fame through his work on various pen /stylus programs, including McDraw II and Ink Development.

Around the same time, in 1995, Pierre began designing what would become eBay. The first item sold on his experimental platform Auction Web was, of all things, a broken laser printer, an item that the buyer gladly received. Over the next year, eBay flourished, offering a way for people to buy all sorts of used (and new) items. Sellers are charged a small fee, creating a revenue stream that far outstripped Pierre’s regular earnings.

By 1996, when Omidyar signed a licensing deal to offer airline tickets online, the site had hosted 250,000 auctions. In the first month of 1997, it hosted two million. By the middle of that year, eBay was hosting nearly 800,000 auctions a day.

In September 1998, eBay went public, and Pierre became a billionaire. He stood as chairman from 2008 through 2015, buying and selling Paypal during his time as head of the peer-to-peer commerce platform.

Moving often as a child prevented Pierre from forming lasting relationships with friends his age. He turned this challenge into a positive by refocusing his energy on computers and began programming as a teenager.

How He Gives Back

eBay was created by Pierre in 1995 based on his interest in creating equal access to markets and a trust in humanity.

As a philanthropist, technologist, and innovator, Pierre is driven by the idea that change is possible given the right combination of insight, innovation, talent, and timing.

Over the last 2 decades, Pierre has been active in philanthropy, along with civic, grassroots journalism.

The Omidyar Group (2004) creates, funds, and fosters a diverse collection of organizations and initiatives. Working across sectors and geographies, Pierre and Pam Omidyar have contributed more than $3 billion to causes ranging from economic advancement for the under-served, to human rights, to government accountability and press freedom initiatives.

Pierre is also the founder of First Look Media – a new-model media company devoted to supporting independent voices. At home in Hawaii, Pierre is founder and publisher of Honolulu Civil Beat, a local news service that encourages greater civic engagement through media.

In today’s article, we learned about the origins and successes of 2 American tech immigrants, Jan Koum and Pierre Omidyar. The immense impact of Whatsapp and eBay continues to be felt worldwide and affects almost all of us.

The opportunities and range of contacts available in the USA are what fostered their success, as well as so many other tech giants such as Elon Musk (Tesla).

We can help you learn more about investment immigration options suitable for your goals and needs. Click the button below to book a private one-on-one call with one of our representatives.